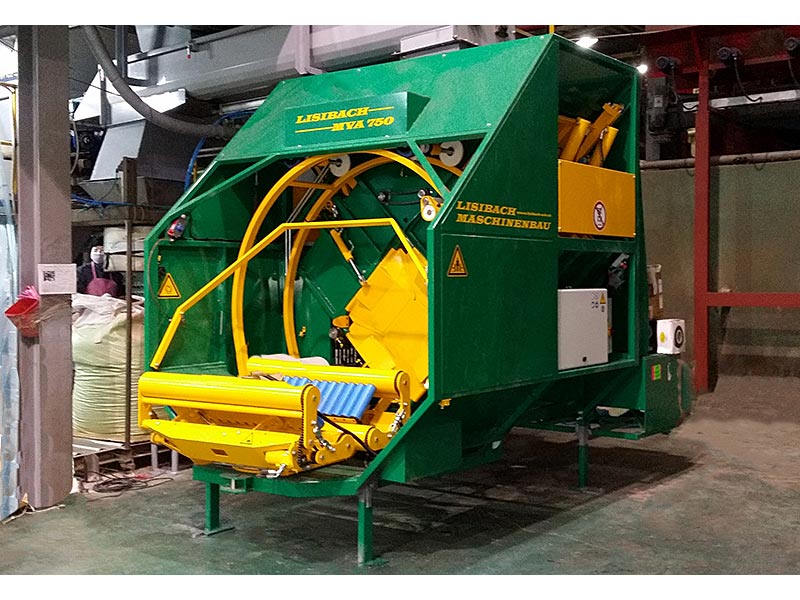 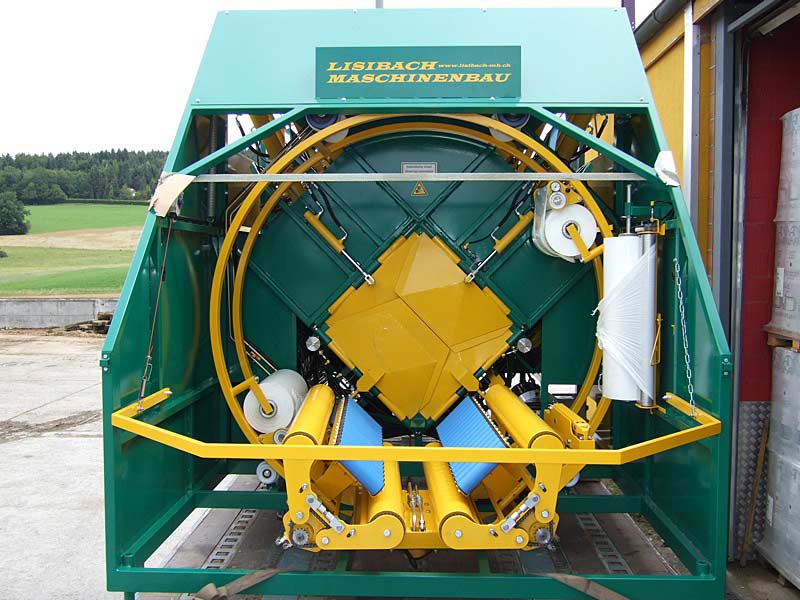 The electronics are centrally located in an industry-standard switch cabinet. The machine is controlled by a Beckhoff computer with a Windows 10 operating system. This opens up unlimited possibilities for automation and expansion.

Machine operation, monitoring and settings can all be completed on a 12-inch colour touch screen. Optionally, a tablet with a 12-inch screen is available that is connected to the machine via WLAN. The system can also be connected to an external network.

Remote maintenance/access via VPN can be easily and securely implemented over a LAN or WLAN connection. 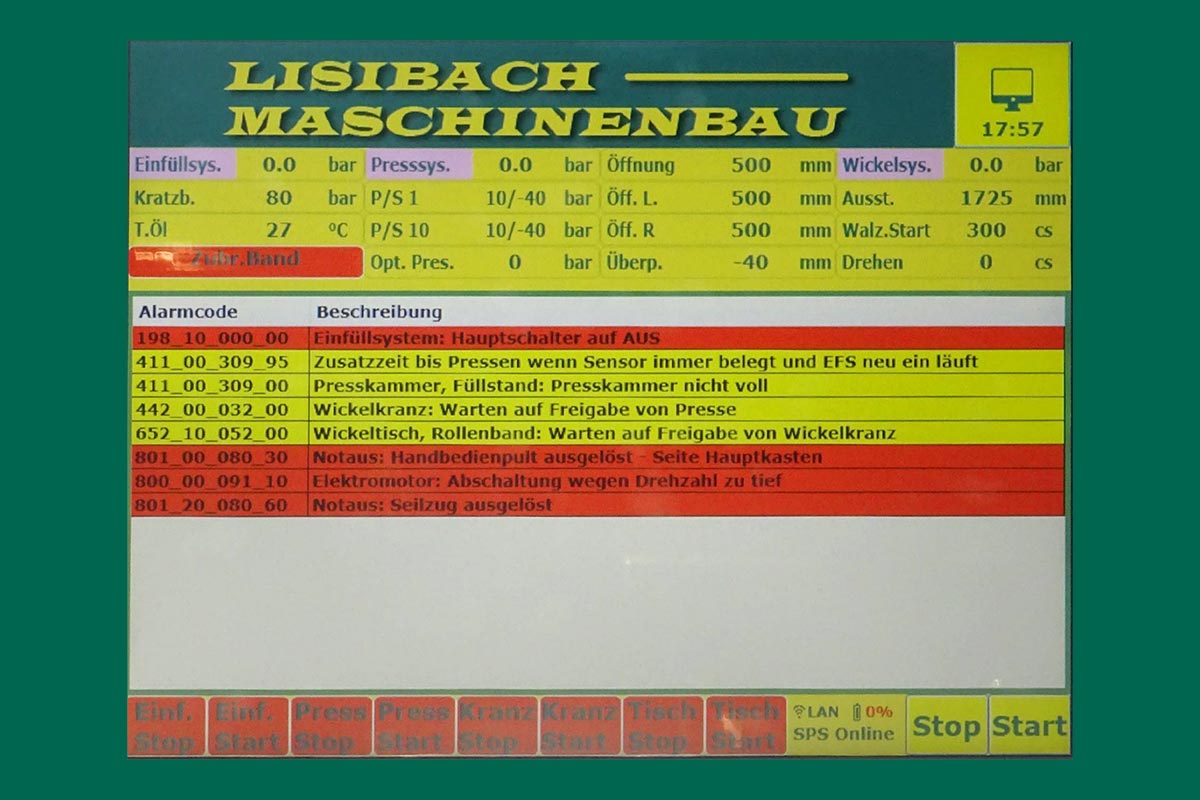 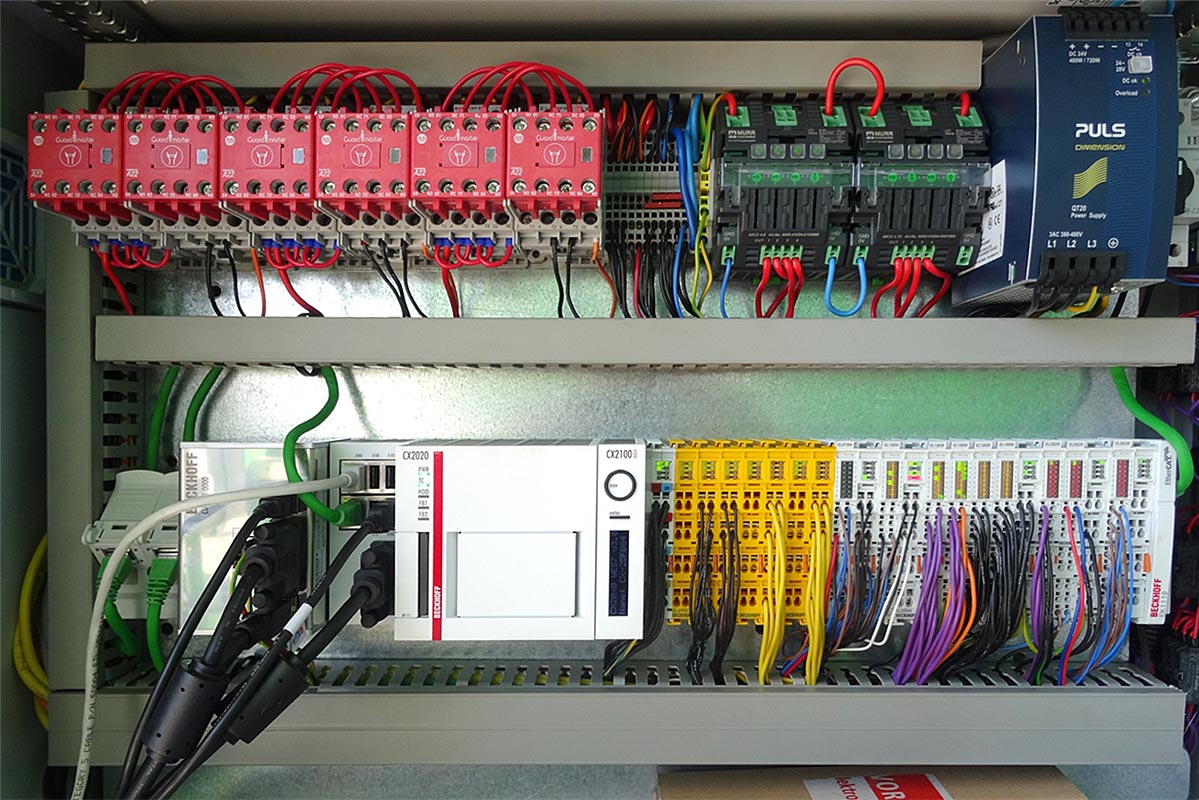 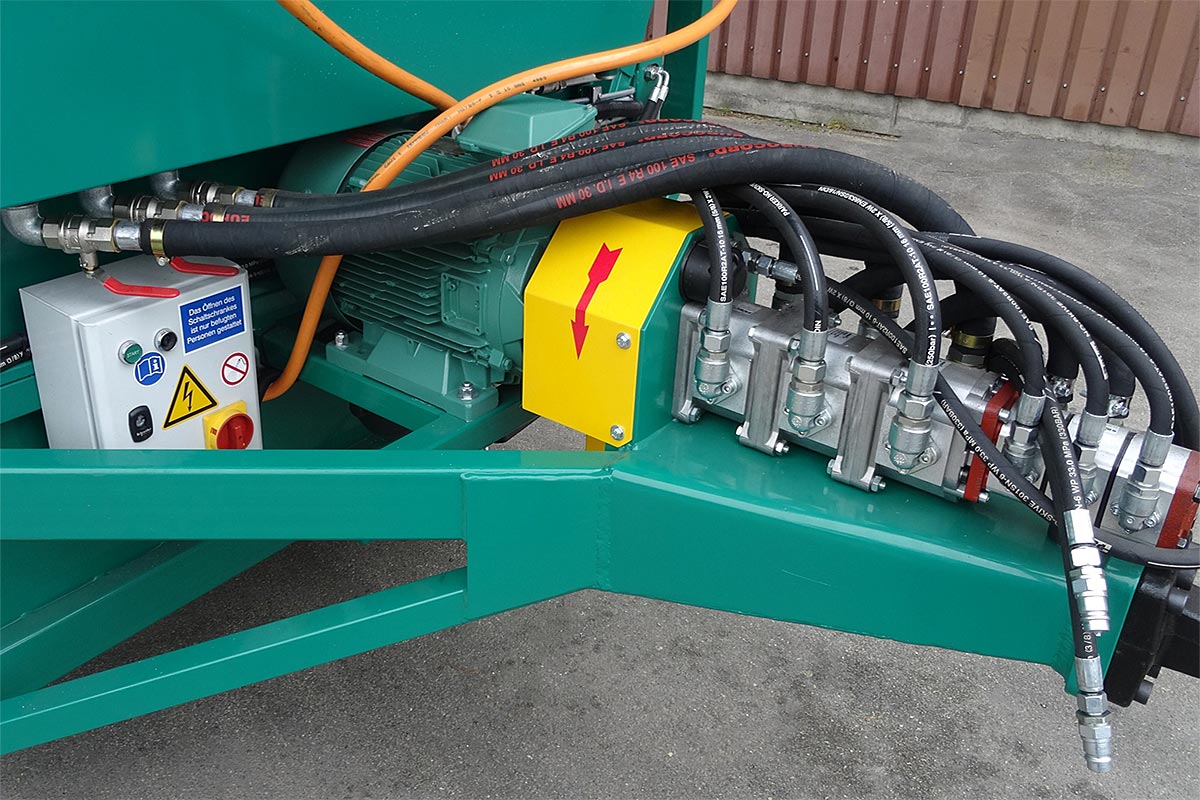 The machine is driven by a 15-kW electric motor. A tractor power generator or a diesel emergency generator can be used when the machine is operated in the field.

The electric motor is the most efficient power supply with just €3.00 per hour in electricity costs. This is also a significant advantage when the system is used in industrial plants, where filling the bale chamber sometimes takes longer. The baler waits during the filling process without consuming energy unnecessarily.

The baler can be filled on the left or right side of the machine. A dosage wagon dumps the maize directly into a receiving hopper. The machine can also be filled from above with a telescopic loader. For stationary operation, the system is also available without a filling system. 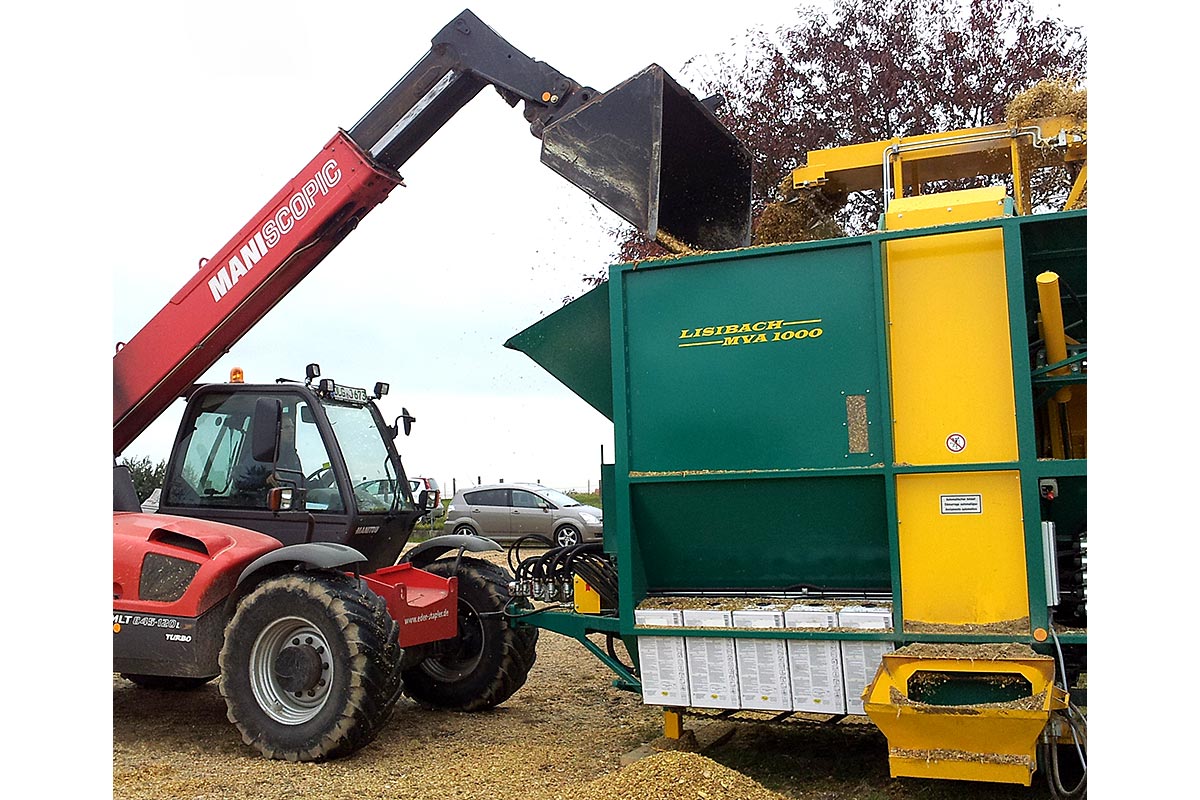 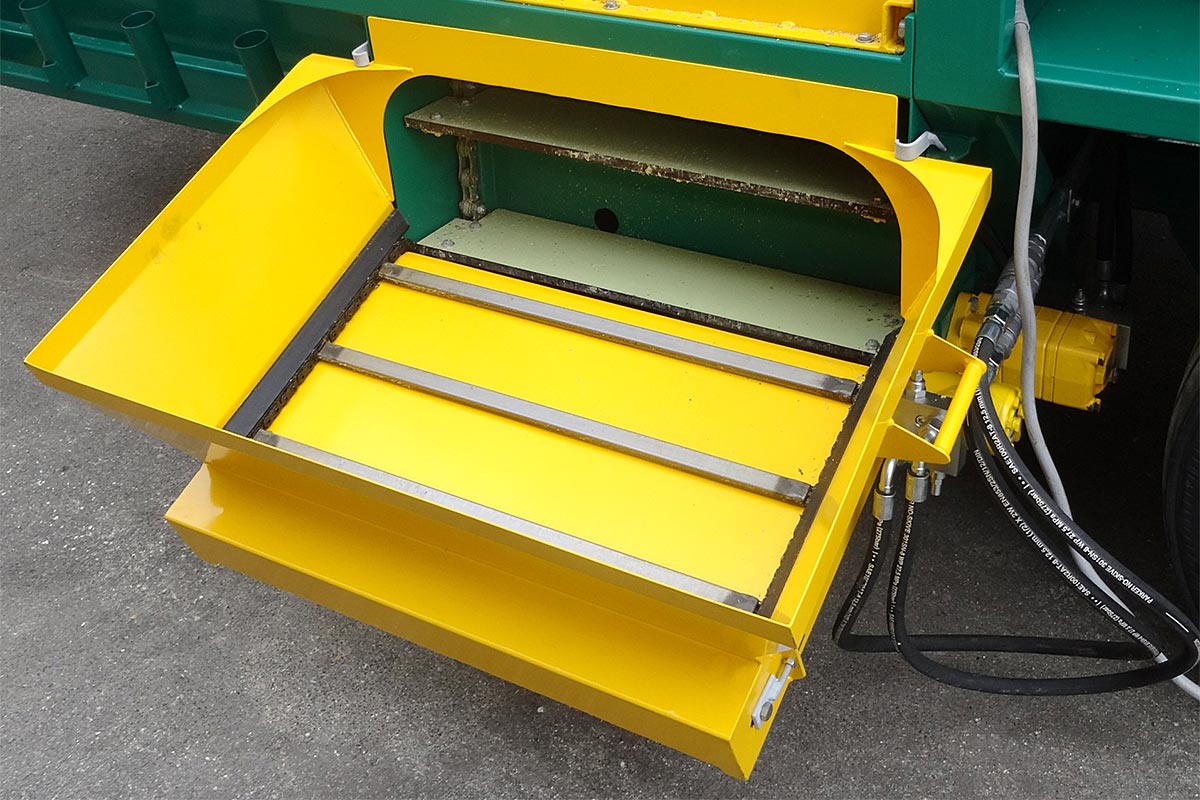 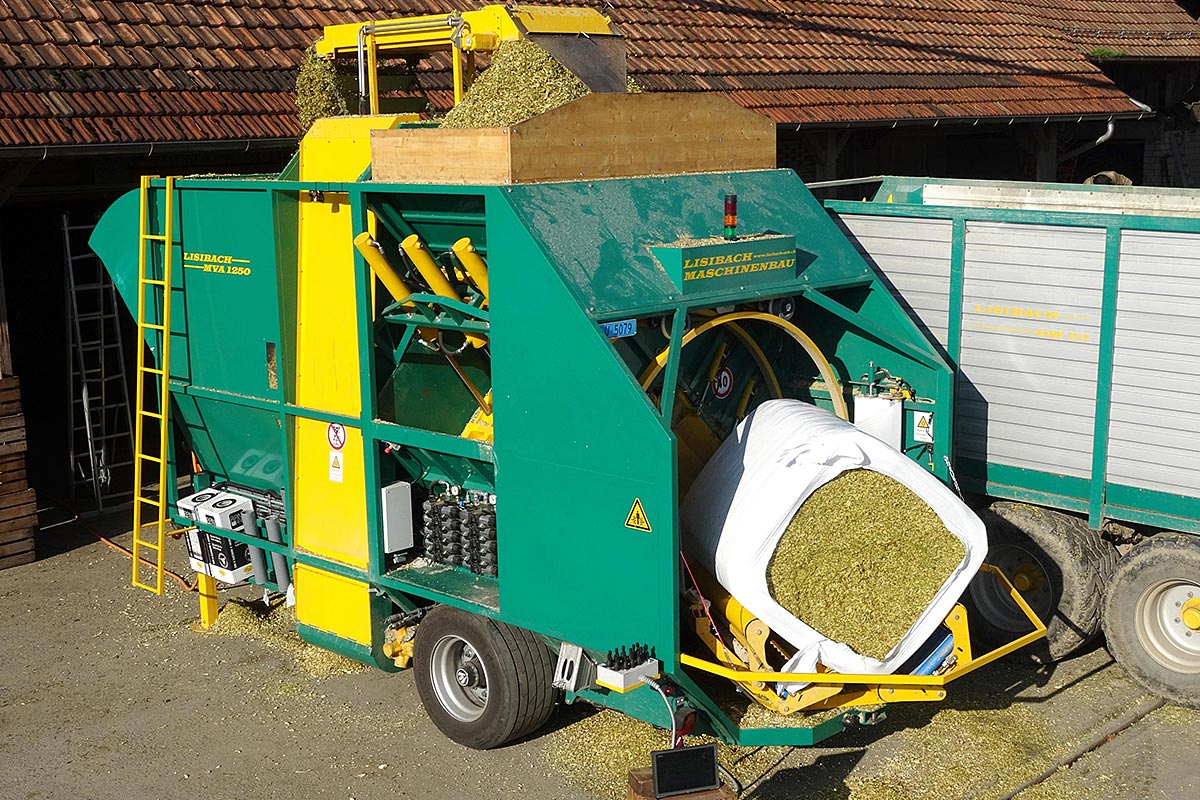 The maize is transported directly from the feeder belt into the bale chamber by the vertical conveyor and linear conveyor. The filling process does not need to be interrupted once the baling process has begun. The maize is piled above the bale chamber and serves as the supply for the next bale. If this storage space is insufficient, the maize is transported into the storage bin via the return conveyor. The volume of the bin can accommodate up to 6 bales. 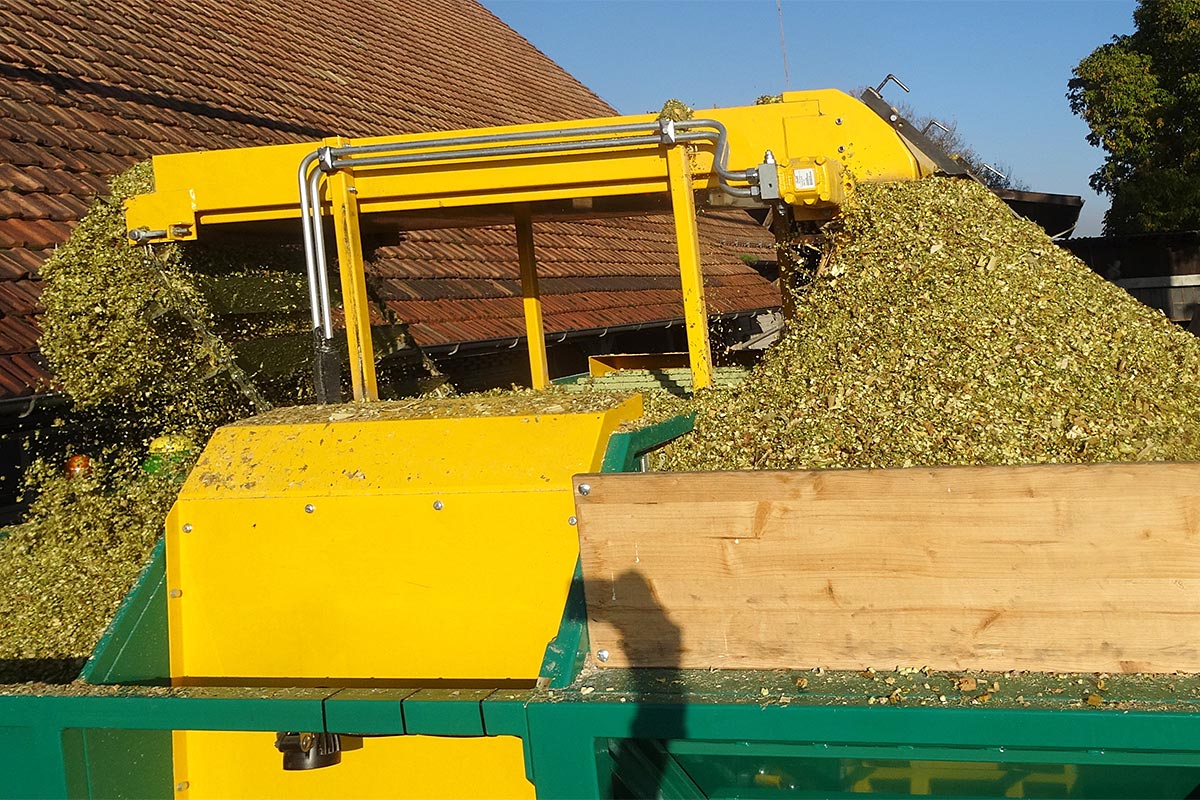 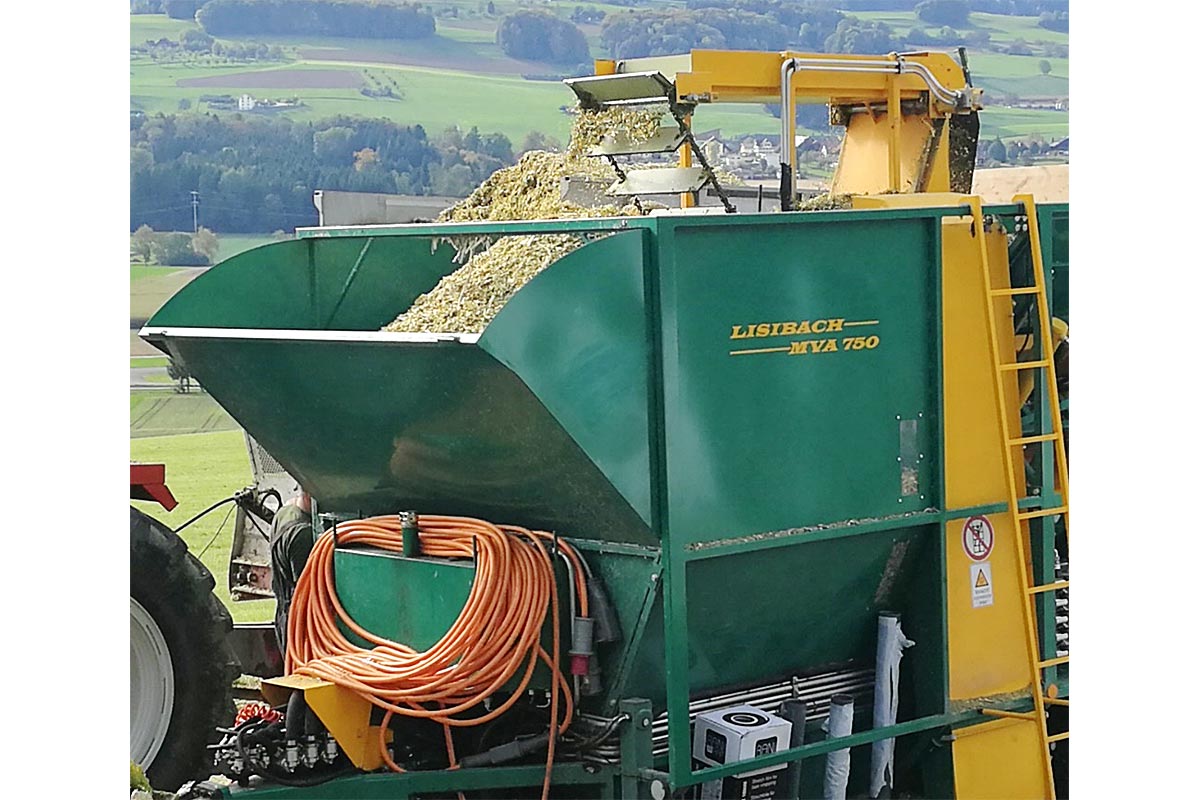 The machine can be continuously fed with maize. If the baler cannot process everything, the maize is temporarily stored in the 16 m3 hopper. If filling process is too slow, the machine automatically takes additional material from the storage bin. The scraper floor conveys the material back onto the vertical conveyor. This allows the machine to be fully utilized even when less or no material is being filled.

The bale chamber has two transversely arranged rams. The chamber is filled directly by the filling system. No pressing energy is consumed. The distribution rollers ensure uniform filling of the bale chamber.

When the entire volume of the open bale chamber is filled, both rams begin to close at the same time. All the material is compressed in one step. The final dimension after compression is always the same and corresponds to the machine-specific bale size. The time needed to compress the material is only 10 – 14 seconds.

The maximum pressing force is 28 tons per square meter. This results in a force of up to 35 tons per ram.

To press more air out of the material, it is compressed beyond the bale form and compacted. The ram then moves back to the ejection position to relieve the pressing force. This results in bales with significantly increased dimensional stability. Wrapping the bale with normal stretch film allows for better absorption of the pressing force. 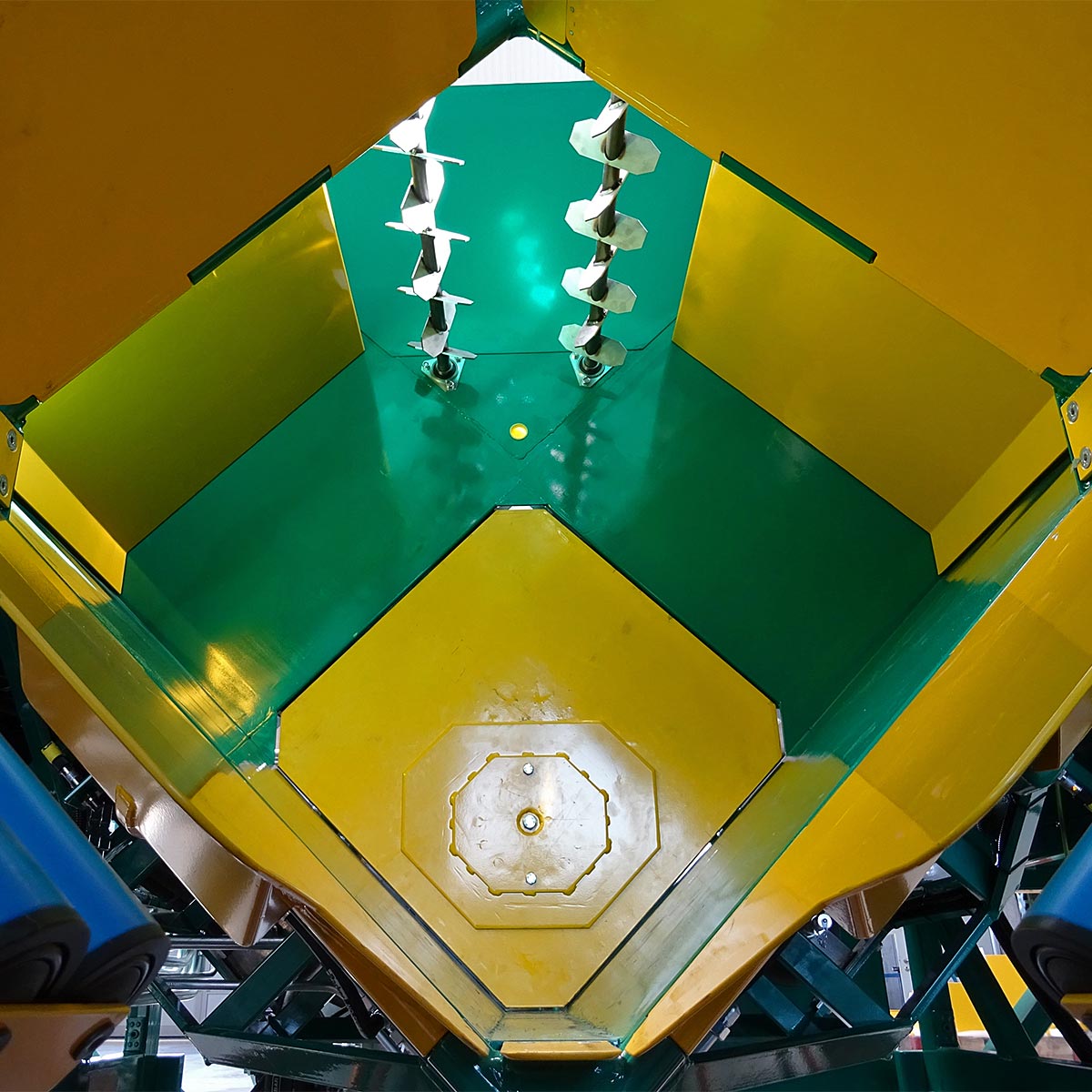 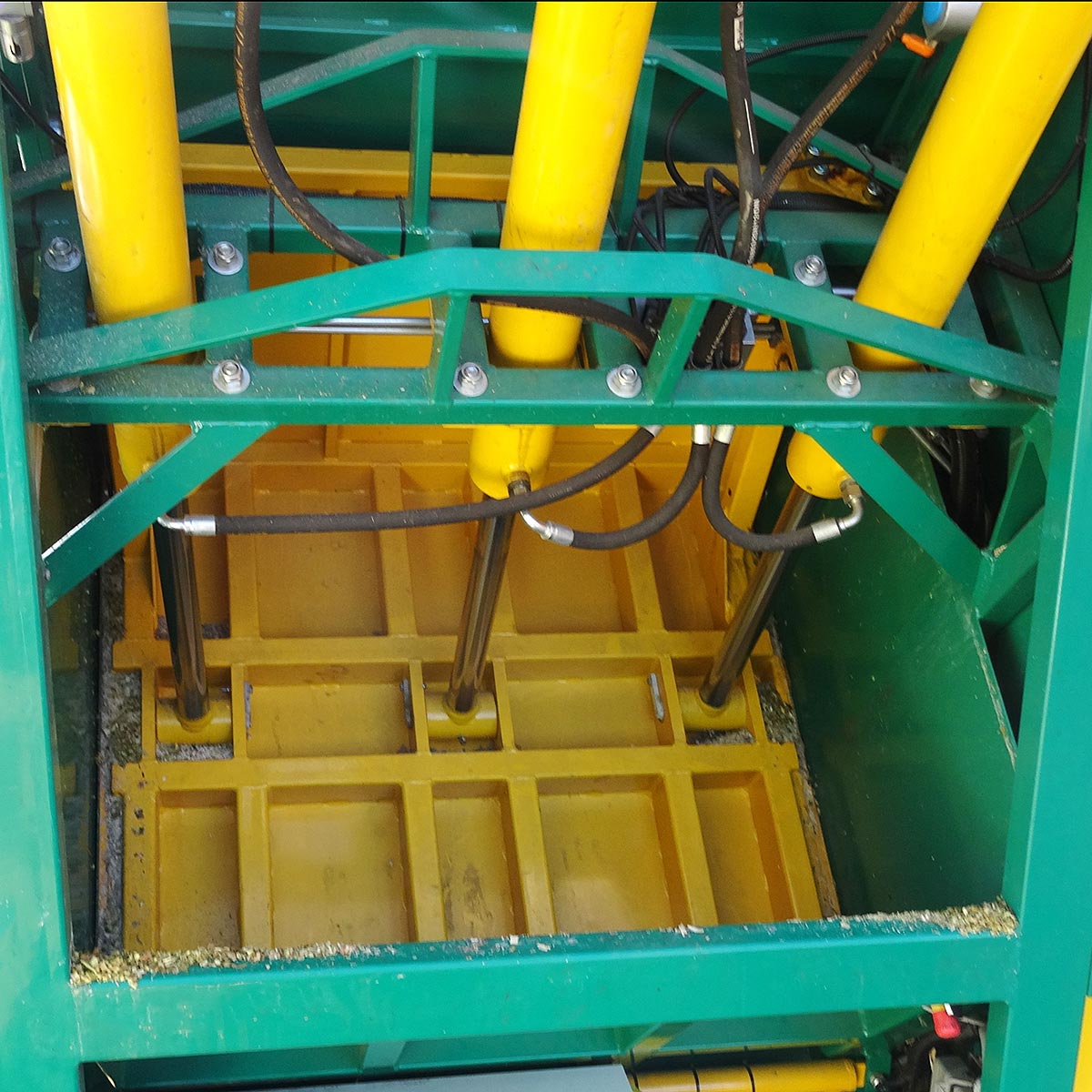 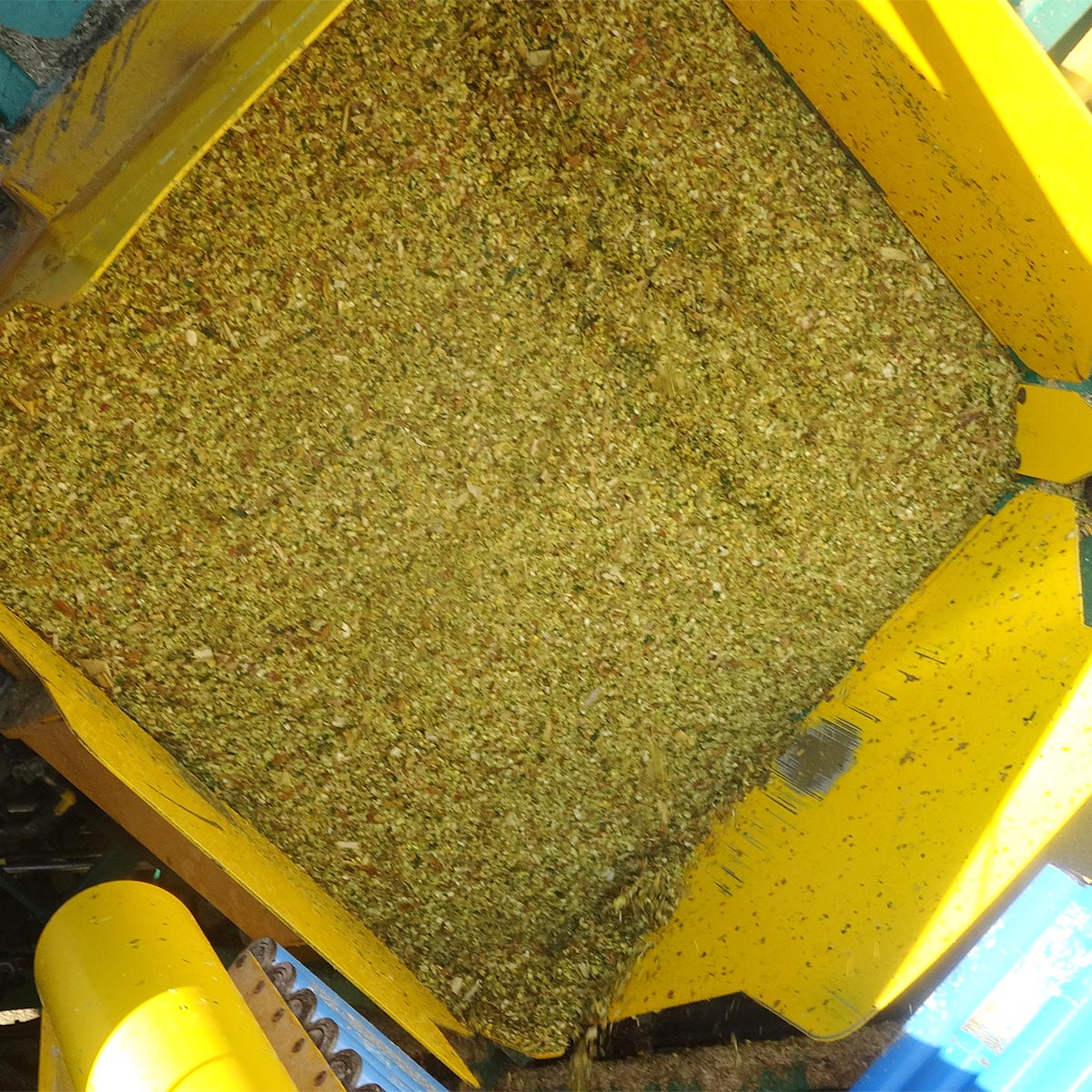 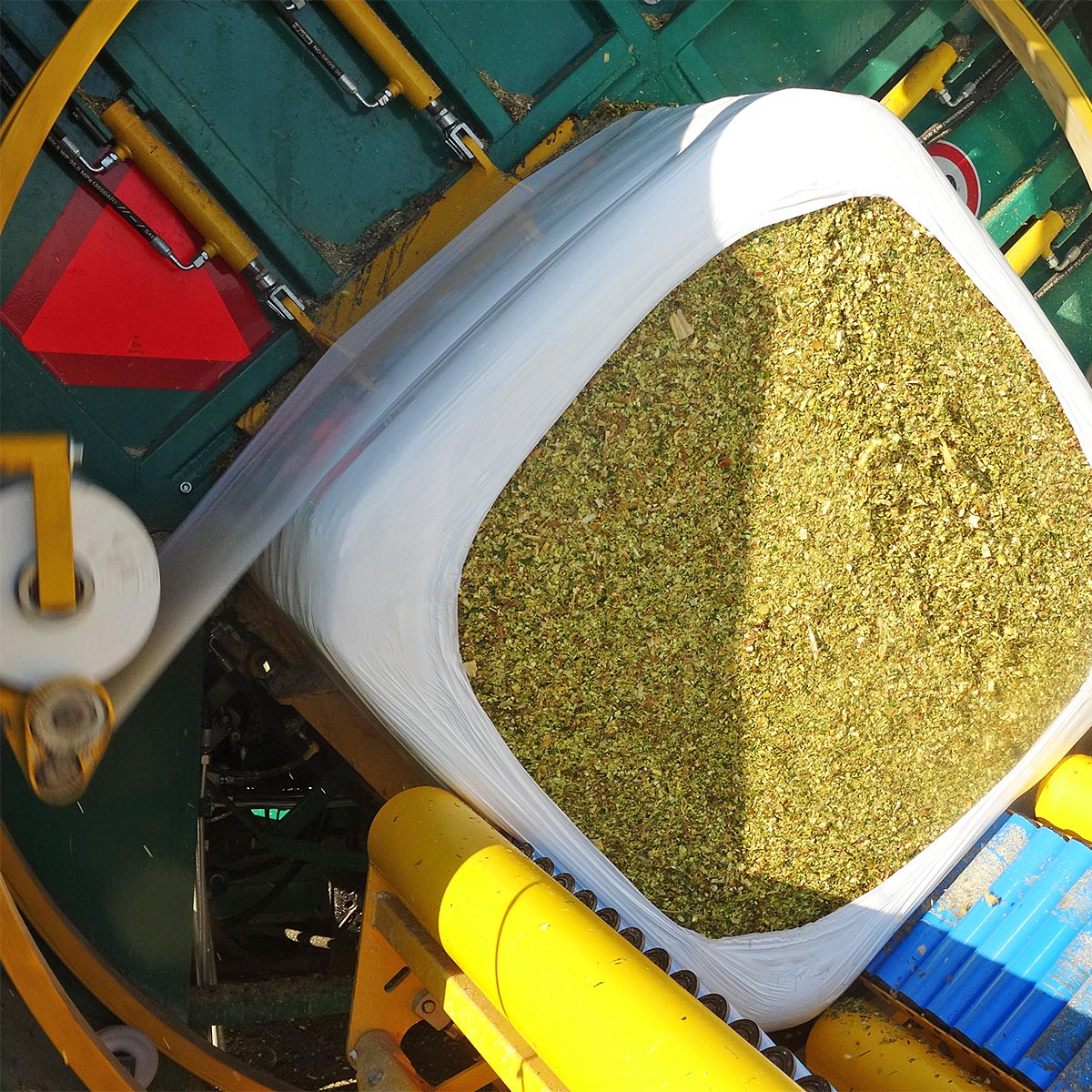 Four covers open once the bale is completely pressed together. The covers guide the bale when it is ejected. Normal stretch film with a width of 500 mm is wrapped around the open covers. In order to absorb the enormous pressing force, a film thickness of 35 µ (at least 30 µ) is recommended instead of standard 25-µ film.

While the wrapping ring wraps the film around the bale, a cylinder pushes the bale out of the bale chamber. This combination creates a spiral wrap over the entire length of the bale. Four layers of film are applied to the bale in this step. The cost for these 4 layers of 35-µ film is approximately €1.90 and they replace the bale net or mantle film usually used by other machines.

The ejection cylinder pushes the bale directly onto the wrapping table. The table turns the bale as the rollers simultaneously rotate the bale on the table. Normal stretch film from a film roll with a width of 750 mm is wound around the bale.

In order to absorb the enormous pressing force, a film thickness of 35 µ (at least 30 µ) is recommended instead of standard 25-µ film. Four layers of film are applied horizontally on the wrapping table using this method. The cost for these four layers of 35-µ film is approximately € 2.00. 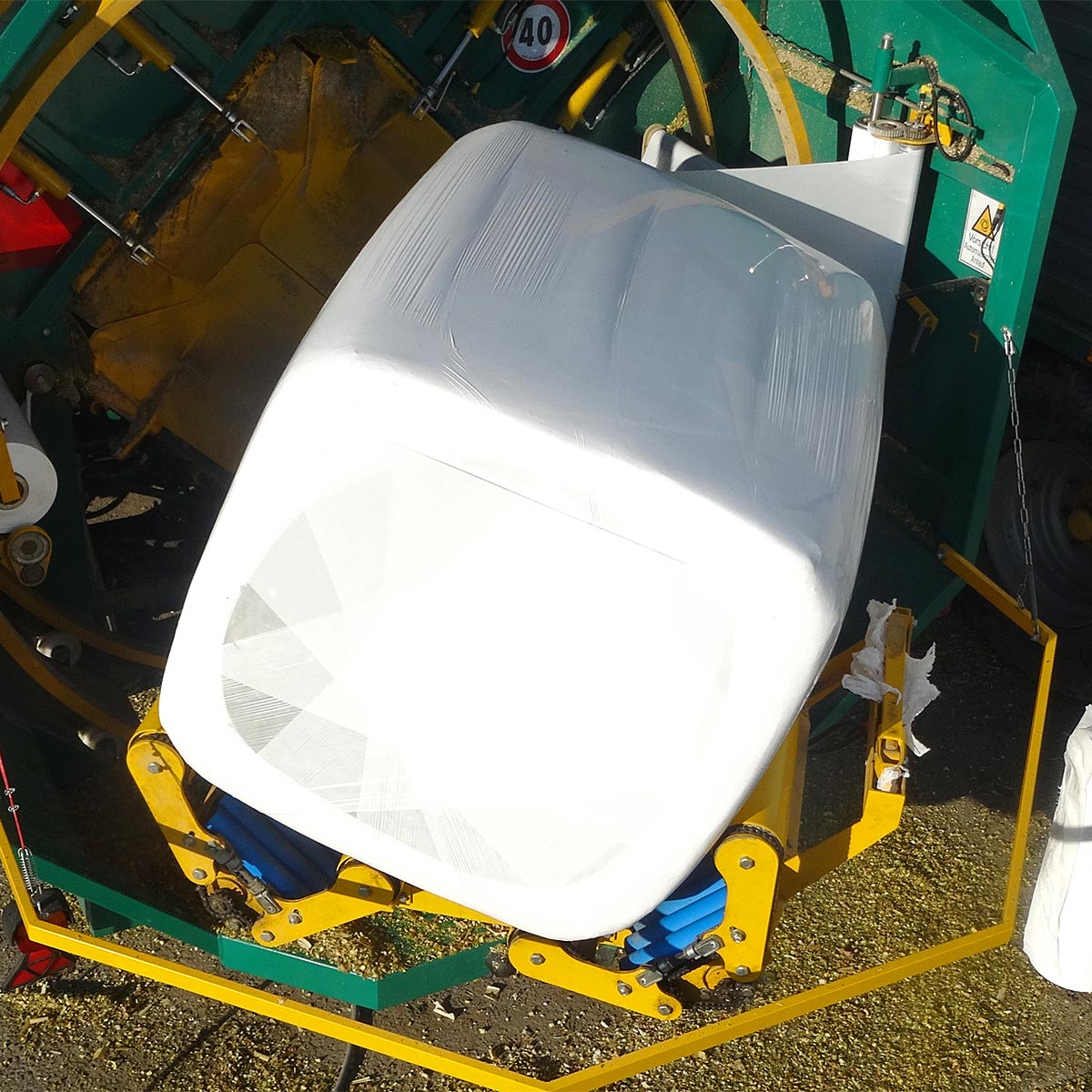 The bales are removed from the wrapping table with a suitable feeder. For easy handling, we offer an optimised square bale gripper. The bales can be easily stacked thanks to their square shape. Several bales can be stacked on top of each other. Compared to round bales, square bales are easier to load onto trailers, to secure and to transport. They also save space. 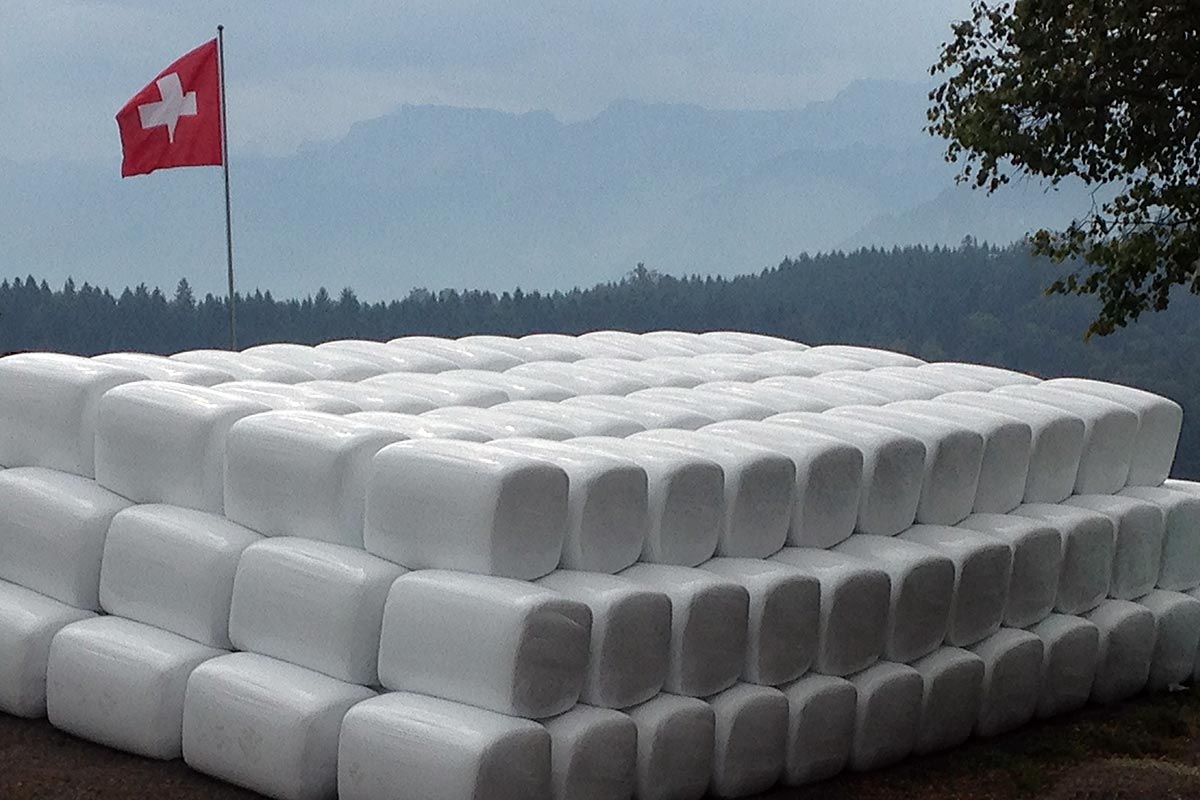 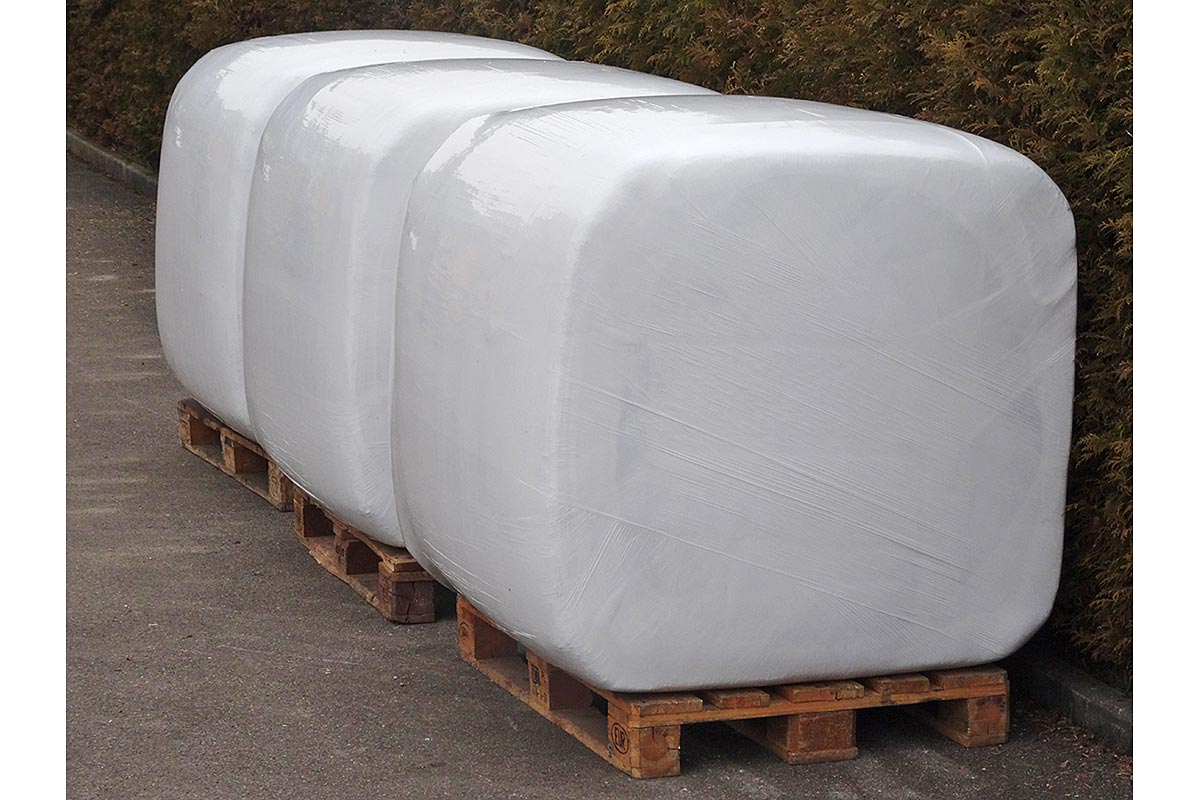 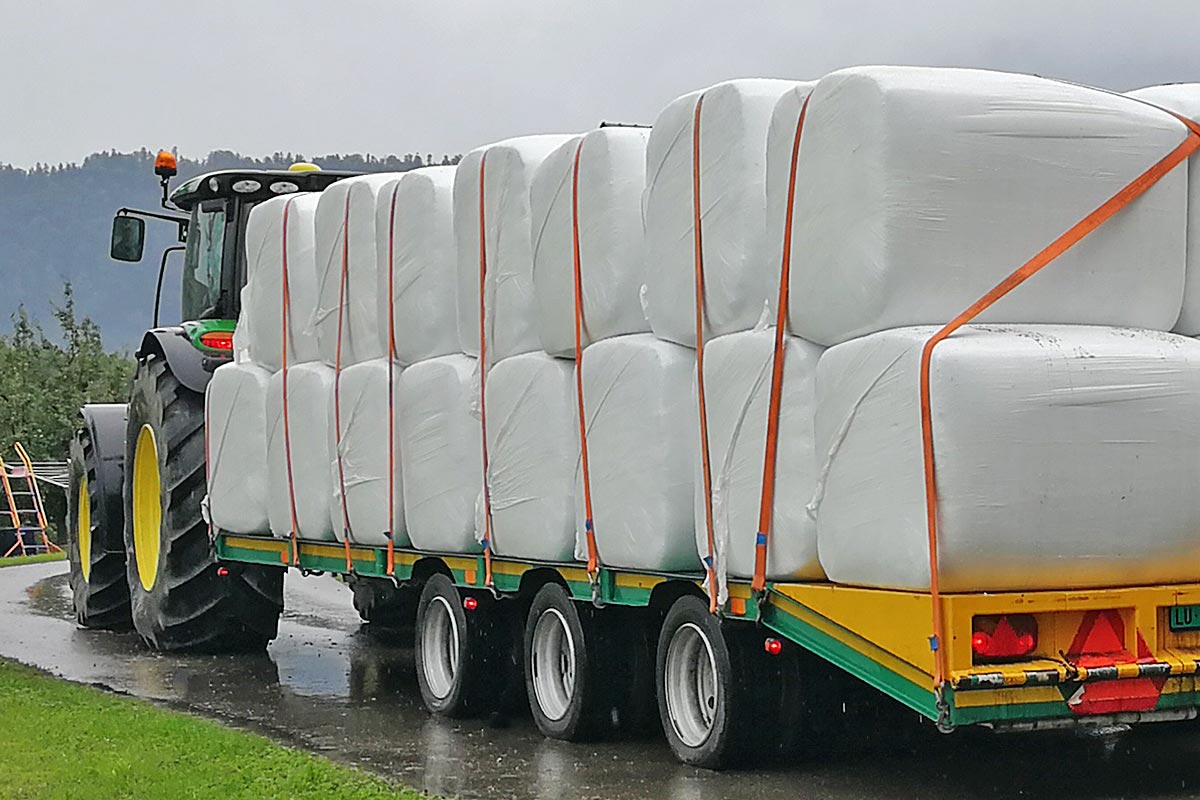 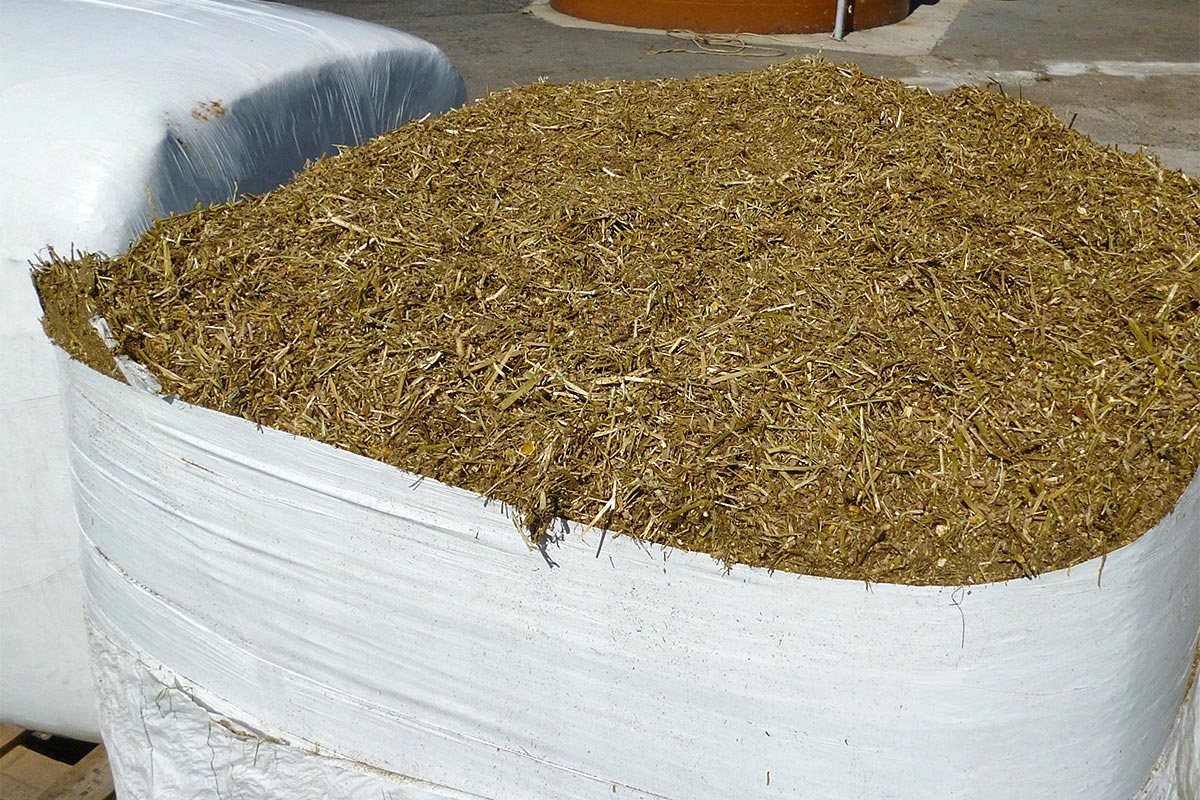 The enormous bale density is also evident when they are opened. Since only stretch film is used – no bale net or mantle film – it is also very easy to open the bale. Simply clamp the bale and cut the film. Then squeeze the bale a little more and the maize falls out. The film then lies on top of the maize heap.

Alternatively, the bale can easily be picked up with a bale fork or a fork with grapple. If the film is cut open, the maize falls out and the film remains on the tips/tines. This is a great advantage when filling feed mixers. If just a little feed is used each day, it is possible to cut a standing or lying bale slice by slice, just like a sausage. The rest of the bale remains tightly packed thanks to the wrapping in two directions.